Zizwe United have been among the leading teams in the Western Cape ABC Motsepe League for a number of seasons now and will have their eye firmly on promotion to the National First Division this campaign.

But before that they will want to impress in their debut in the Nedbank Cup, having narrowly missed out on qualification in the recent past.

The team is coached by the experienced Julius Dube, who was once in charge of Chippa United in the recent past.

The club were formed in 2014 and have made steady progress up from the SAB Regional League since then.

They entered 2020 unbeaten in the ABC Motsepe League after 10 games and with qualification for the Nedbank Cup as well, have been in excellent form in this campaign.

The team plays their home matches at the Nyanga Stadium, one of the hot-beds of soccer in the Mother City, and a former home of Seven Stars, who thrilled the township before merging with Cape Town Spurs to form Ajax Cape Town.

Khuzwayo and Erasmus out of Carling Cup

Diski Voice - July 31, 2015
0
Kaizer Chiefs have been forced into a late change to their Carling Black Label Cup starting line-up with the withdrawal through injury of goalkeeper... 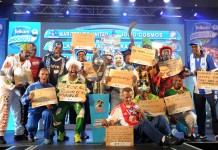 Pitso: The League Must Start In January