A moment of brilliance from Thabo Rakhale inspired Orlando Pirates to a 1-0 away win over CS Sfaxien in the Confederation Cup at the Taieb Mhiri Stadium, Tunisia, on Sunday. 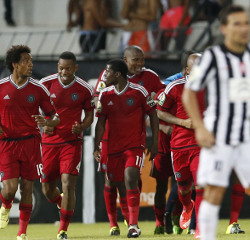 Pirates dominated the opening minutes, creating couple of chances with the clearest one falling to striker, Lehlohonolo Majoro , but he failed to beat Sfaxien goalkeeper Jeridi Rami.

Sfaxien came back into the game after Pirates failed to convert their opening minutes dominance into goals, but like Pirates, they failed to create much in terms of clear scoring chances or threaten Bucs goalkeeper Brighton Mhlongo.

Sfaxien were very lucky not to concede a penalty with just 5 minutes remaining in the first half after Sifiso Myeni was clearly brought down inside the box by defender, Saidani Wajdni with the goal at his mercy.

The game went into half time goalless.

Pirates started the second half with intent and it was no surprise when winger, Thabo Rakhale produces a sublime chip over the keeper to make it 1-0.

Sfaxien tried everything to salvage something from the game but they found Mhlongo well awake as he produced two great saves in the last 10 minutes to ensure Pirates travel back with all the points on offer.