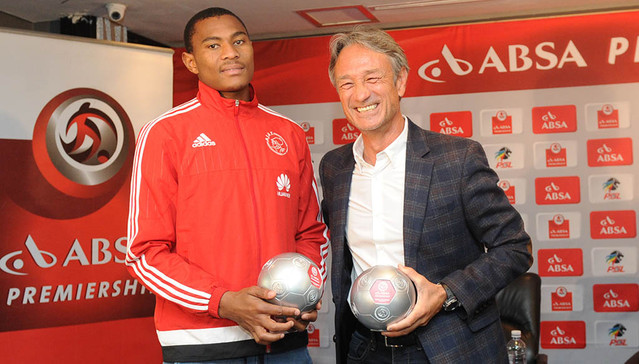 Ajax Cape Town striker Prince Nxumalo and Muhsin Ertugral, Mpumalanga Black Aces coach, have been announced as winners of the Absa Premiership Player and Coach of the Month for the month of August 2015.

AmaZayoni have enjoyed an impressive start to the 2015/16 Absa Premiership season, securing two victories and a draw in their opening three matches under the guidance of Ertugral. The Turkish-born coach joined MP Black Aces during the off-season, and has performed admirably to lift the morale and invigorate some of the youngsters and long-serving players at the club.

Following closely on Aces’ heels on the standings are the Urban Warriors with two victories from three outings. Their good start to the season has been spearheaded by the rejuvenated Prince Nxumalo, formerly with SuperSport United. Nxumalo has hit the back of the net three times, in the two come-from-behind wins for Ajax thus far. He is currently the leading Absa Premiership goal scorer with three goals.

The judging panel felt that the Durban-born striker has been head and shoulders above his peers during this early part of the campaign. Not only has he banged in the goals, Nxumalo also allows his teammates to feed off him as the target man, which has worked wonders for Ajax.

As proud sponsors of the Absa Premiership, Absa is pleased with the great start to the season that has seen football followers witness some stunning goals, while not forgetting the important roles Ertugral and Nxumalo have played in their team’s dominant performances in this early stage of the campaign.

After three rounds of Absa Premiership fixtures, a whopping 52 goals have been scored thus far.