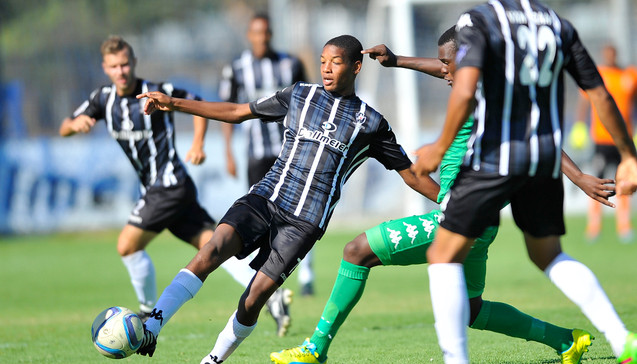 Kosta Papic’s Royal Eagles are making goal-scoring look easy, the KZN side racking up another four in their 4-2 win over Milano United in one of six NFD matches on Saturday.

Goals from Joshua Sauls and Sabelo Nyembe took Spurs through to victory at the Puma Rugby Stadium , where Morgan Shivambu was on the score-sheet for the Limpopo team.

A 71st minute goal by Brent Adonis put the home side in front at the Coetzenberg Stadium, but Igugu Lekapa earned a derby point through Abednigo Mosiatlhaga’s equaliser.

Eagles netted through a Taariq Fielies own goal, Raymond Monama and a George Sedwyn brace. Lance Beyers and Filies scored for the Cape team at the Harry Gwala Stadium.

Magesi were ahead at the Old Peter Mokaba Stadium via a 10th minute penalty from Karabo Tshepe. But for the third game running Bucks fought back for a point, Mazwi Mncube converting a 64th minute cross.

Cosmos had Mxolisi Macuphu sent off in the first half at the Kanyamazane Stadium. A powerful late strike from Tshediso Patjie won the home side all three points.

Both sides had good chances to score, but in the end the derby spoils were shared at Athlone Stadium

On Sunday, Thanda Royal Zulu extended their lead at the top of the National First Division table after racking up their seventh win out of 10 matches in one of two games played in KwaZulu-Natal on Sunday.

Amabhubesi took completed control at the top of the table after comfortably beating University of Pretoria at the Umhlathuze Sports Complex.

They were ahead through a 20th minute penalty and stretched the lead further after the break, before Pogiso Mahlangu pulled a goal back late on.

A fifth home win on five means that Roger Sikhakhane’s men are now five points clear of Stellenbosch FC at the top of the table with a third of the season completed.

The other match of the day was a feisty affair played on a rain-drenched Sugar Ray Xulu Stadium pitch as 10-man Kings beat nine-man Usuthu.

The visitors had Sbu Magaqa and Lungelo Dlamini sent off in a five-minute spell before half time, before Sbonelo Khubone was dismissed for the hosts, who then went on to score through a Philani Gumede header and a late own goal after Sello Motsepa cross went into the wrong goal.