Orlando Pirates retained the Carling Black Label Cup 2015 after beating Kaizer Chiefs 4-3 on penalties. The game had ended 1-1 after 90 minutes. 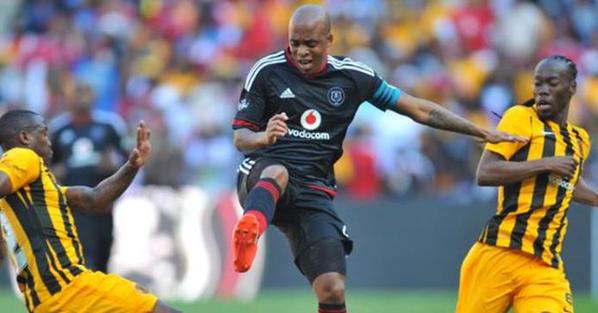 Both teams did not start the game well but as expected, Pirates were slightly the better side. Their passes were sharper and they were first to the ball, with Thamsanqa Gabuza and Lehlohonolo Majoro proving problematic to the Chiefs makeshift centre back pairing of Siboniso Gaxa and Siyanda Xulu.

It was no surprise when Bucs created the first real opportunity of the game when Gabuza was put through on the right but found Reyaad Pieterse well awake to deny him.

In the 20th minute, Sifiso Myeni produced a splendid free-kick from the edge of the box to make it 2-0 after Pirates were awarded a free-kick for a foul by George Maluleka on Gabuza.

Pirates were forced into making a substitution on the half hour mark after Gabuza suffered a hamstring injury. He was substituted by the new man, Tendai Ndoro.

Chiefs started coming more into the game with 15 minutes of the half left and created the first real chance on the 40th minute, George Lebese played in a great cross that found David Zulu in the box but his left footed strike – under pressure went wide.

As customary, Five minutes into the second half, fans were given an opportunity to make substitutions, Chiefs fans voted for Willard Katsande to come on, he replaced Maluleka and Pirates fans voted for Masuku, who replaced Majoro.

Brighton Mhlongo was eventually called into action after an hour when he saved Tshabalala’s free-kick over the crossbar for a corner.

Chiefs finally levelled matters in the 66th minute, Siphelele Mthembu released Reneilwe Letsholonyane with a silky back heel inside the box and he clinically finished to Mhlongo’s right to make it 1-1.

Not many goal scoring opportunities were created after that with only Masuku shooting just wide for Bucs and Mthembu hitting the side-netting for Chiefs.  The penalties were, as usual in this cup, needed to decide the winner.