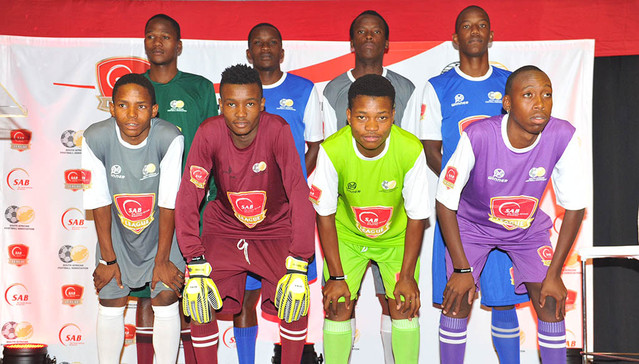 The South African Breweries (SAB) in partnership with the South African Football Association (SAFA) officially launched the Gauteng leg of the 2015/16 SAB League on Tuesday, 10 November at the SAB Gauteng Regional Office in Isando, Johannesburg. The launch of South Africa’s SAB League was used by to also hand over new kits to the 100 participating teams in the Gauteng SAB League for the upcoming season.

In line with the SAB League’s vision of its holistic development to football, the proud sponsors of the country’s largest development league announced its Study Assistance Programme that will see players participating in the league furthering their academic studies.

The study assistance programme will officially kick off in the new season and will see players building a strong academic foundation to fall back on post their football careers.

The SAB League is currently in its 15th edition after being formally established in 2000. Since then, the nationwide league has proven to be the breeding ground for top scouts and continues to be a talent identification hub for South African clubs that are in search of the country’s next football stars. Not only will the SAB League unearth quality footballers, it will now produce educated footballers who are able to make informed decisions about the futures.

SAB’s Economic Development Manager for Corporate Affairs, Octavious Phukubye shared the SAB’s excitement of the new season ahead, saying that the 2015/16 edition of the SAB League will the SAB taking holistic development to even greater heights.

”We are quite excited at how we have taken our approach to holistic development to a new level. Today’s kit handover marks the start to the new SAB League season and we are confident that through our partnership with SAFA, we will continue producing the country’s next footballers who are equipped both on the field as well as academically” said Phukubye.

Echoing the sentiments of SAB, SAFA’s Gauteng Regional President, Mr. Anthony Reeves said that the new season would give birth to a totally different class of footballers.

”Modern football requires players to be educated and through this exciting addition to the SAB League, we are proud as SAFA to be associated with a brand such as SAB that is pulling out all the stops in its holistic approach to football development” said Reeves.

The SAB League Kit Handovers will continue across other SAB League regions during the month of November.