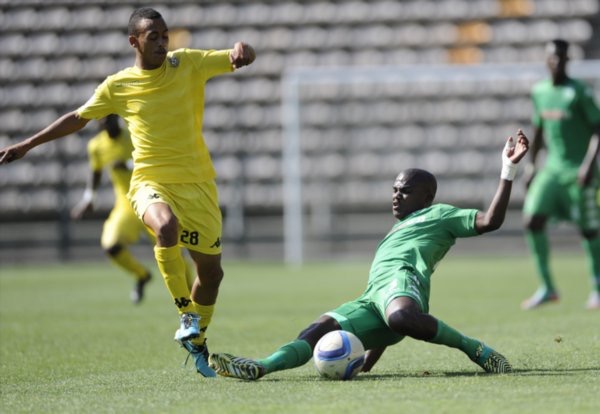 Royal Eagles dropped out after the top three after losing to Milano United, Witbank Spurs taking their place after they beat Black Leopards in what were two of Saturday’s five NFD matches.

The game at the King Zwelithini Stadium between Royal Eagles and Milano United took place in what at times seemed like torrential rain. The Cape side however were able to come up trumps in difficult conditions thanks to Brandon Theron’s goal in the 82nd minute as the visitors claimed all three points for their fifth win in 12 matches this season.

Up in Mpumalanga, Witbank Spurs came from behind to beat Black Leopards 2-1, the result taking Spurs into second spot, above Cape Town Al Stars on goal difference.

Leopards took a lead into the half time break after a goal from Themba Mabuyango. The hosts levelled matters in the 53rd minute through Bongane Mathabela, Joshua Sauls getting Spurs’ winner 20 minutes from time.

The match at Dobsonville between Moroka Swallows and African Warriors ended in a 1-1 draw. Both goals were scored by the Free State side as Tamsanqa Ngema put Warriors ahead, only for Swallows to grab a share of the spoils after Gift Sithole put the ball in his own net.

Down on the coast, FC Cape Town’s trip to Richards Bay proved to be fruitless as they lost 3-1 to Thanda Royal Zulu. The Cape side led 1-0 at the break through Maboke Matlakala, but Thanda hit back strongly in the second half as Siduduzo Dlamini, Sibongiseni Zuma and Sakhile Khubeka got their names on the score-sheet.

Vasco da Gama ended a recent run of poor form with a hard-fought 2-1 win over Highlands Park at Parow Park. Vasco found themselves on the back foot after only two minutes when Matome Mabeba slotted in a free kick. But the Cape side showed character to fight back as Chaz Williams and Mbulelo Wambi sealed victory with two goals in eight second half minutes just after the restart.

The rest of the weekend results: