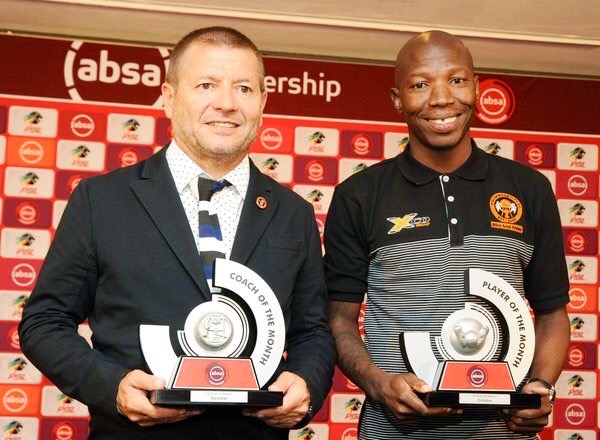 Polokwane City have been recognised in both the Absa Premiership Coach and Player of the Month awards for October, thanks to their impressive form in the league last month.

Coach Josef Vukusic and club captain Jabulani Maluleke have bagged the Coach and Player of the Month awards respectively. This recognition was the first time the club had made a clean sweep at the individual monthly awards held at the Premier Soccer League office today.

Slovakian coach, Vukusic, took home his first coach of the month award since joining Polokwane City at the start of the 2018/19 Absa Premiership season. Polokwane City’s good form during the month has catapulted the club into fourth spot on the Absa Premiership log table. Vukusic guided his side to two victories and a draw in October – 1-0 away win at Kaizer Chiefs, 1-1 draw with SuperSport United and then closed off the month with a gritty 1-0 win over Maritzburg United.

The awards judging panel made up of former players, a former coach, broadcast media and analysts, praised Vukusic for his players’ understanding of his philosophy, for turning the team’s fortunes around in a short period and being able to produce good results against well-resourced teams.

Maluleke (36), meanwhile, arguably the most consistent player in the Absa Premiership, was singled out as the best performing player in October owing to his incredible skill in midfield for his Rise and Shine team.

The judges singled him out for having a phenomenal work rate for his age as well as his brilliant link-up play between defence and attack, including his good ball distribution skills. He provided an assist in City’s last league win over Maritzburg United at the end of last month.

The Soweto-born Maluleke, who is also City’s set-piece specialist, today won his first player of the month award in his 13th year in top flight football.
Maluleke’s teammate Edgar Manaka, Orlando Pirates’ winger Vincent Pule and Bidvest Wits duo Simon Murray and Thabang Monare were also mentioned for their form during the month.

Vukuzic and Maluleke will each receive R5 000 from Absa, proud sponsors of the Absa Premiership. Absa congratulates both the coach and player on winning their respective accolades for October.