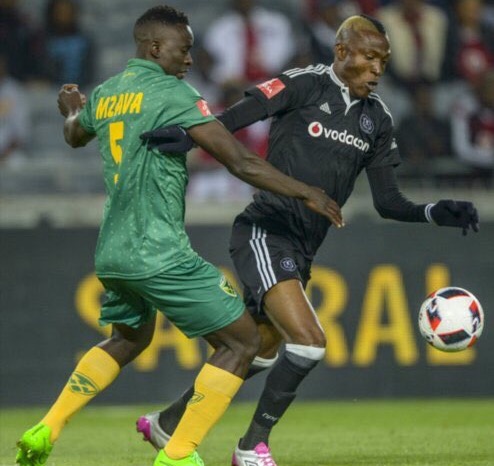 Tendai Ndoro helped himself to a hat-trick as Orlando Pirates trounced Golden Arrows 3-1 in their opening game of Absa Premiership last night at Orlando Stadium.

Ndoro scored the opening goal just four minutes into the second half. He had to simply pass the ball into the net after a great pass from Thabo Rakhale.

Arrows levelled matters just past the hour mark through Nduduzo Sibiya. When Pirates goalkeeper Felipe Ovono failed to hold on to an easy cross, the ball fell to Kudakwashe Mahachi whose shot hit the upright before Sibiya scored from the rebound.

An unmarked Ndoro restored Pirates’ lead in the 67th minute with a free header from Mpho Makola’s free-kick.

Ndoro finished off the game with his third goal of the night with 15 minutes left.

Stars were reduced to ten-man with 35 minutes to play when Sphamandla Mlilo was dismissed after getting a second yellow card for pulling Bradley Grobler back.

Despite being a man down, Stars toiled and were rewarded in the 62nd minute when Robert Ng’ambi headed past Ronwen Williams from Vuyo Mere’s free-kick.

Dr Molemela Stadium: Second half strike from Kurt Lentjies was enough to give Maritzburg United a deserved 1-0 away win at Bloemfontein Celtic.