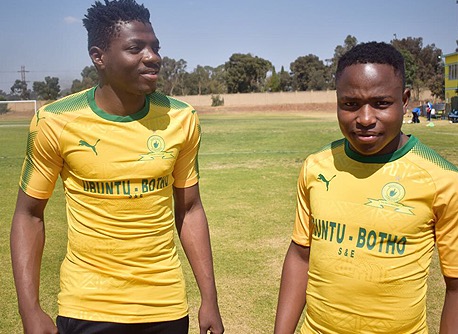 Mamelodi Sundowns have confirmed that they have promoted youngsters Keletso Makgalwa and Thendo Mukumela from the development side.

The Limpopo duo have already started training with the first team and available for selection. Mukumela and Makgawa will wear jersey No. 34 and 35 respectively.

Makgalwa was instrumental in the Sundowns’ MultiChoice Diski Challenge (MDC) side that won the tournament and was rewarded with the MDC’s Player of the Season award.

The 19-year old Mukumela is relatively experience as he has been to the Under-17 and Under-20 World Cup and he also represented the senior national team during the African Nations Championship (Chan) tournament.

Makgawa says he is looking forward to playing alongside the likes of Billiat.

“It’s a huge motivation to play alongside players like Khama Billiat, George Lebese, Percy Tau, Oupa Manyisa and others. I want to be at their level too one day which is why I am prepared to work hard,” Makgalwa told his club site.