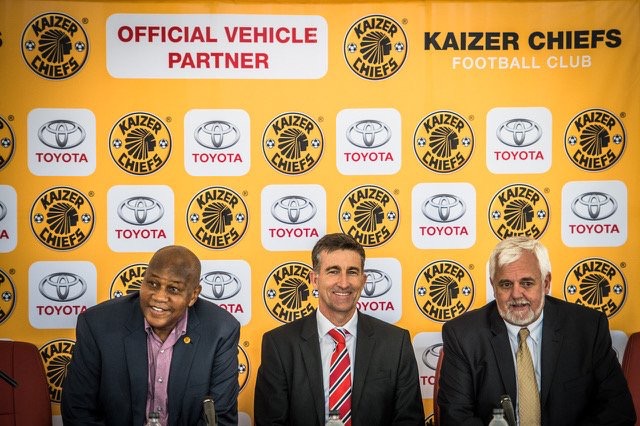 Kaizer Chiefs are pleased to announce the signing of a partnership agreement with the number one leading Car manufacturer in South Africa, Toyota South Africa Motors (TSAM). The Japanese-based car manufacturer will become the official motor vehicle supplier to Amakhosi.

The deal, which lasts for an initial three years, will see the universally recognised multinational corporation supply the Club with 20 vehicles to meet all Kaizer Chiefs’ transportation requirements. The fleet ranges from hatchbacks, sedans, SUV’s, bakkies to panel vans and minibuses. The vehicles will cater to the needs of the business.

“We couldn’t have asked for a better partner than Toyota to provide us with transport needs for our business,” said Kaizer Chiefs Executive Chairman, Kaizer Motaung. “Toyota is one of the biggest motor vehicle manufacturers in the world and their brand is synonymous with quality and reliability across the globe. These attributes resonate deeply with Kaizer Chiefs, as we are a Club that aspires to the same ideals and high standards. We are delighted to establish a relationship with them and look forward to a prosperous and mutually beneficial partnership.”

“Whether it is rugby, cycling, motorsport and now soccer – we are behind South African sport wholeheartedly. The values of perseverance, leadership and endurance are those that are synonymous with the Toyota brand and its history in South Africa. We’re looking forward to driving the Kaizer Chiefs team for the next three years. Remember that Toyota is behind you every step of the way both on the field and off it. We are excited about joining the Amakhosi fans in supporting their team and hope to grow this partnership over time.”

Supporters are encouraged to attend home games and arrive early so they can enjoy this exclusive and exciting benefit.