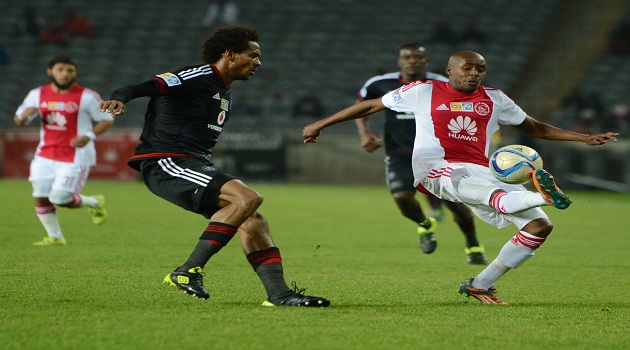 Ajax Cape Town rode their luck to beat Orlando Pirates 1-0, knocking them out of the MTN8 at Orlando Stadium on Tuesday night.

The only goal of the match was scored by Ajax returnee, Ndiviwe Mdabuka who scored the decisive goal ten minutes into the second half.

The first real chance of the match fell to Myeni in the 16th minute, after receiving a pass from the debutant, Luvuyo Memela inside the box, he (Myeni) sold the defender a dummy before picking his spot but Anssi Jaakkola produced a great save to deny him.

Rakhale and Phungwayo wasted good opportunities in the 30th and 36th minute respectively but it was Lehlohonolo Majoro that should have given the Buccaneers the lead before halftime. After being put through by Memela, he beat the defender to create space but his left foot attempt went well over the bar with only Jaakkola to beat.

The Buccaneers fans must have been wondering how the game went into halftime goalless.

Majoro had two more opportunities to score after mistakes at the back by Rivaldo Coetzee but he failed to capitalize. On one occasion, Coetzee’s poor attempt to head the ball back to his keeper put Majoro through, one-on-one with the keeper, he missed.

Menzi Masuku, who came on for Memela in the 60th minute, missed the best chance of the match to pull Buccaneers level, backtracking at the far post five yards out, he failed to convert a Ntsikelelo Nyauza’s cross from the right found him unmarked at the back post but his header went wide with the goal at his mercy.

Pirates throw everything at Ajax in the dying minutes but it was not enough.

In the other quarterfinal, Bidvest Wits beat SuperSport United 3-1 in extra-time after the game ended 1-1 in 90 minutes. Wits goals were scored by Sibusiso Vilakazi, Daine Klate and Henrico Botes with Jeremy Brockie scoring the solitary goal for SuperSport.